Some of the most wonderful things in my life without lesson plans are the journeys Richard and I have made.  I have always kept a travel journal, first they were hand-written.  Now I use my tablet with a keyboard to make my journal entries.  Since most hotels now have WiFi, I often post my daily entries on Facebook.  I wasn’t crazy about Northern Ireland, in general, too much talk of peace and too much evidence of unrest, but Northern Ireland is home to one of the most amazing places we’ve visited, the Giants’ Causeway.

When we got up today, it was as foggy as it was yesterday.  Normally, on a day like this, you would want to stay home, build a fire, and read in front of it; however, as my husband Richard says, “Your standards change.”  We’re on vacation, but we are not the travelers who like to sit around the pool. We want to make the most of every minute, see as much as we can see.

After a full Irish breakfast (eggs, toast, rasher (like Canadian bacon), bangers (delicious sausages), fried potato cake, broiled tomato, sautéed mushrooms—whew!), we were on the road with the fog, and I had thoughts of Brigadoon, especially when we passed a place called Loughareema (literally “vanishing lake”). I couldn’t see a speck of water, let alone a lake!

From Carnlough, on the northeast coast of N. Ireland, we drove northwest along the

lovely northern coast road to Carrick-a-Rede (translated: the rock in the road). In this case the “road” is the sea route for Atlantic salmon, and the rock is any number of small craggy islands off the coast which were vantage points for salmon fishers. The fishermen would string rope bridges from the mainland to the rocky, off-shore islands from whence they would get the big salmon hauls. So the draw of this place is a 65′-long rope bridge stretched across an 80′-deep chasm.

The scenic walk up to the bridge is free, but this is a pretty well-kept secret. Fortunately, we had grilled the ticket seller at the bottom of the trail and bought only one bridge-crossing ticket, no bargain at £5.60 ($9.00).  Anyway, we both walked up to see the dramatic scenery, then I crossed the “scary” bridge (their word not mine) which did some 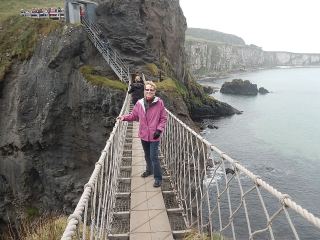 swaying, while Richard, who had no interest in walking the bridge, talked to the pretty, young, female ticket taker, a Catholic who is married to a Protestant.

After talking for a while, Richard came out and asked her, “During ‘The Troubles’ how did people know whom to shoot?  I mean you’re all Irish.” She explained that Protestants call the Catholics “squinties,” because apparently they squint, and unless they shave above their nose, they only have one eyebrow, the original unibrowers!  She laughed as she told the story.  Too funny!  She said her husband affectionately calls her “Squinty.”  We still don’t know exactly how the Protestants and the Catholics really tell each other apart.

She also said that after a bomb was exploded in Derry (Londonderry to the Protestants) a few years ago, numerous people were interviewed on TV.  Every single one of them said they were sick of the violence, just tired of it.  Unfortunately, there’s still a lot of hatred in Ulster, and the Protestants are still marching through Catholic neighborhoods in what appears to be just plain spite.

Our next stop was at the place I had been wanting to see ever since our last trip to Ireland in 2005, the Giants’ Causeway. This is a World Heritage Site, and it is really

something.  It’s a geological phenomenon—gigantic, hexagonal columns of rock that fit together like a honeycomb, 40,000 of these tall columns all along the coastline and going out into the sea. It’s really remarkable.

After I climbed around on the columns for a while, along with hundreds of other tourists, Richard and I took quite a hike, so we could see the Causeway from other angles. 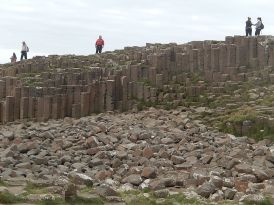 Of course, because it’s in Ireland, there is a legend associated with it, wherein the Irish giant Finn McCool builds the Causeway so he can get across the sea to fight the Scottish giant Benandonner (known in Scotland as Fingal).  Benandonner turns out to be so massively huge that Finn runs back across the Causeway and asks his wife to hide him. When Benandonner arrives at the McCool cottage, he finds Mrs. McCool and the baby (Finn in disguise in a cradle) home alone, so Benandonner leaves. Some story, huh?  Bit of a letdown, and that playing-the-baby part certainly can’t be a source of Irish pride, but the good-hearted Irish are happy to tell the story, even if it gets the best of them!

We decided long ago not to let the weather impact our plans. Today looked miserable, but it turned out to be fine. The sun tried to come out, and around 4:00 p.m. we saw some blue in the sky. We never did see the sun, but the fog lifted, and we did see one true natural wonder of the world and a lot of beautiful country and coastline. It never rained, and although the wind kicked up to about 20 miles an hour, we were walking so much we were never cold. If we waited for good weather, we wouldn’t see very much. As it was, today was another wonderful day in Ireland.

For the first time in quite a few days, it was cloudy when we got up at 6:15. We were up early, because we had to walk .6 of a mile to pick up our tickets at the tour off…ice before boarding the ferry to Mull at 7:25 a.m. Richard said, “Who booked this Early Bird Tour?”  Haha!  It soon started to rain, and it rained (drizzled) all day.

We boarded the large ferry as foot passengers, and Richard was thrilled not to be driving. Our first stop was the town on Craignure on the east coast of the rather large Island of Mull, where we boarded a bus taking us west to the port town of Fionnphort. There was taped commentary about the island’s history, geology, flora, and fauna on the one-hour trip–mostly interesting and informative. Our bus ride ended on another wharf, and we immediately boarded a smallish boat for a 20-minute ride to the tiny, uninhibited island of Staffa.

What excitement erupted on the boat when a minke (‘min-kie) whale, cavorting in thewater, was spotted!  The darn thing was too fast for me to ever get his whole body. The captain stopped the boat, so we could watch the minke for a little while. As we approached Staffa, the captain pulled up close to Fingal’s Cave which is in a basalt formation under a cliff right on the edge of the sea. The basalt columns here are just like the amazing, hexagonal, basalt columns at the Giants’ Causeway in Northern Ireland that we visited in 2013.

There’s a crazy legend about two giants, Fingal from Scotland (who lived in the cave on Staffa) and Finn McCool from Ireland. Finn crossed the land mass that once linked the two countries in order to fight and prove he was the biggest, baddest giant. The Irish giant was quite the braggart until he got to Scotland and saw Fingal’s size. Finn ran back across the Giants’ Causeway and had his wife dress him like her baby. Fingal followed Finn and soon was beating on the McCool door. When Mrs. McCool answered, Fingal saw the huge baby and thought, “If the baby’s this big, how big is his dad?” He turned tail and ran back to Scotland. No fight. No real hero.  No climax to the story!

Because we saw Fingal’s Cave from the boat, and we only had an hour, we decided to go look for puffins, cute, little birds that nest on Staffa and are often seen in Alaska. It was quite a walk to the nesting cliff, and because it was sprinkling, the grassy trail with its numerous rocks was quite “slippy,” as our captain said. Richard walked about half way, and found a comfy rock for a resting place. I carried on with Mark from Wales, whose wife with a bad heart had stayed on the ferry. The captain told us to walk out to this marker on the hill and to wait about 10 minutes. He also said the more people on the cliff, the better to get the puffins to come up to the cliff from down below, where they would be swimming in the bay.

Mark and I were the last to arrive, so I just stood on the end of the puffin-waiting group. I could see the little guys swimming down below and was taking a picture of those in the water, when all of a sudden, a puffin landed about 6′ from where I was standing! Then another landed and another! They were all right there by me. Sometimes it’s best to be last! I took photos and made videos, and it was amazing! 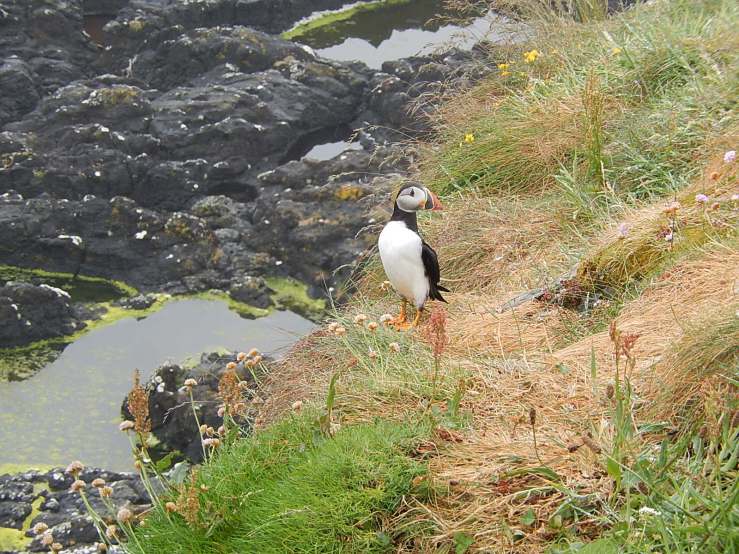 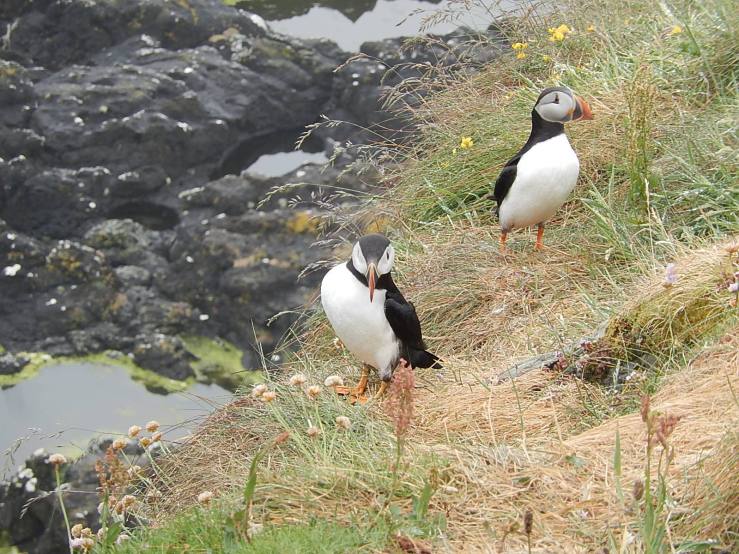 We walked back to the jetty where the boat had dropped us off. Richard and I started to walk out to peek into Fingal’s Cave, but the rocks were uneven, and we weren’t sure we even had enough time to get out to the cave, go in it, and get back. It was still drizzling, so after walking a short way, on the treacherous basalt columns, just like the ones at the Giants’ Causeway in Ulster, we turned around and went back to wait for the boat, which arrived in no time.

As much as I liked seeing the other end of the Giants’ Causeway, the puffins were THE BEST!

8 thoughts on “Of Massive Giants and Little Birds”