charged tablet with its little bluetooth keyboard for typing journal entries or playing solitaire while listening to a book on tape on my MP3 player, I’m content. The croissants and cappucinos also add to the ambiance.
Unfortunately, I looked like Wild, Geek Woman. A couple of months ago I added an item to my bucket list–ponytail. One day I just realized that never once in my life have I had hair long enough to pull back into a ponytail. I have a stunning photo of Mother at around the age of 23, and she has lovely long hair, more than enough to make a ponytail. My cousin Heather Otto had two braids as a child, could have been a ponytail.  My Aunt Alice wore a ponytail or rolled her ponytail up in a bun. Cousin Holly Hamilton had such a long ponytail that when she had her hair cut to donate to Locks of Love, she still had enough to make a really long ponytail.
My sister had one long braid for years, and when she finally got her hair cut, the braid was cut off intact. Rubber bands covered by red ribbon bows were placed around both the thicker end at the top and the little end at the bottom, and the pigtail was hung on our Christmas tree every year thereafter. Weird, I suppose, but for some reason, Mother apparently thought the pigtail with its red bows looked Christmasy and hung it front and center on the tree. Oh, or maybe Kay got the pigtail cut off at Christmas time, and it went on the tree that first Christmas as a joke, then got packed away with the other sane ornaments, and that was that. It came out every year thereafter with the ornaments, and on the tree it went.
My sister still has her beribboned ponytail, and her boys, and now her grandchildren, won’t let her stop putting it on the tree. It’s not out on the front of the tree anymore. It’s hung discretely on the back facing the wall. It is, however, often pointed out to new family members as the family circle widens. The new daughters-in-law or out-of-town cousins who make it to Kay’s house during the holiday are often introduced to the pigtail by the younger generations. I imagine the newcomers wonder what else the family is hiding or what this family has come to. But traditions all start somewhere, weird or otherwise. I fully imagine that the pigtail will be passed down through generations to come as a beloved Christmas ornament. 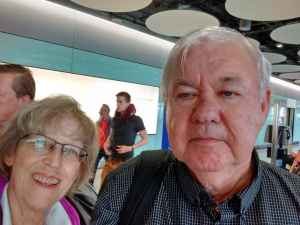 I’m not looking for a ponytail long enough to hang on the family tree. I just want to do that perky, little thing where you pull your ponytail through that “one-size-fits-all,” expandable place on the back of a ball cap while golfing.
So that’s why I look like a wild woman. When I had short hair, and we were traveling, I just ran my fingers through my hair to put it to rights. In other words, I didn’t think to pack a brush or comb in my backpack carryon (which would have made it heavier–ugh!), and the fingers through the coif at this length is not helping in the least.
But what I really want to know is who, for Pete’s sake, designed Heathrow Airport? It is the biggest, muti-layred maze imaginable. It makes rabbit warrens and anthills look positively orderly. You deplane through a jetway and start walking or riding/walking on the people movers, and you walk up inclines and down inclines. You walk around corners left and right, then right and left, passing hallways that seemingly go on forever, also. I don’t mind the walking at all, especially after a long flight, to get the joints moving again, but honestly, how anyone figured out how to get passengers from one plane to dozens of others, going every which way, is mind boggling. This is my fifth or sixth time in this labyringh, and I’m pretty sure I’ve never been in the same hallway twice.
Then you board a bus to get to another terminal, and the bus goes on overpasses, into tunnels, under jetways right past the noses of big United Arab Emirates’ Airbuses on the tarmac, down long stretches of roadway bordered on both sides by concrete walls or barriers. Who figured out those routes? I’ll bet a GPS goes spinning out of cyberspace in this place.
After several hours in the British Airways lounge, we boarded our plane for our short flight to Amsterdam. Short, thank goodness! I don’t even know how the flight crew got the lunch meal served and cleared away before we landed. Short because I had a very talkative, active 2-3-year old in the seat behind me. He loved playing with his tray table, attached to the back of my seat, and talking. Honestly, he chattered away in his little high-pitched voice during the entire 75-minute flight. The mother was preoccupied with the baby she was holding, so the toddler had his way with me! Every time I’d doze off, BAM, the tray table would drop or be put away, jarring my seat. I gave the mother my best teacher stare, but she had her hands full.
Arriving in Amsterdam, 27 hours after leaving Little Rock, remember significant savings–enough to pay for our boutique hotels for the entire trip while we flew business class, we picked up our bags, entered The Netherlands without incident, went through customs with nothing to declare, found an ATM, got some Euros, found the ticket counter for the trains going into Central Amsterdam, went to the train platform, and caught our train with about three minutes of wait time. The 27-minute train ride was uneventful, so we exited the station, and Richard programmed the GPS on his phone to guide us to our hotel, a 10-minute walk from the station. Had the stars aligned or what? How could anything go smoother?
About a Little Rock block from our hotel, Richard stopped walking and said, “My backpack.” Remember that 6.5-pound backpack of his? It was gone! Along with his medicine, his glasses (distance and prescription sunglasses), Kindle, our train tickets to Brugge and Antwerp, his car key (no worries on that one as the car is in the garage back home), and I’m not sure what all. He had slung his backpack over one shoulder and with phone in hand was following the GPS, when he realized the bag was gone. We checked into the hotel then walked back to the train station on the off chance that he had put it down when he programmed the GPS and forgot to pick it up, but no Good Samaritin had turned it in at the train station Lost and Found. We walked back to the hotel (stopping for one quick beer to drown our sorrow), pretty sure that he’d been “backpacked”–had his    backpack cut right off his shoulder.
Back at the hotel, he changed passwords and did what he could to minimize the damage. He’ll deal with the medicine and train tickets tomorrow.
Everything had been going so well. How quickly the worm can turn.