I have this little part-time job which keeps me off the streets and out of pool halls. I write for Life in Chenal, a local magazine with a circulation of 6,000 in our large subdivision. Each month I have a column called “Snapshot” which tells a local resident’s story. I

interview the person, take some photos, and write up the story.  In addition, I usually write a story on a featured business, and often I am assigned a third, fourth, or even a fifth article, which makes for nice pin money.

It’s my “Snapshot” column, however, which I find fascinating. I have interviewed a woman who picked cotton and touched Elvis Presley, a guy who detasseled corn as a kid, another guy who got to jam with Glen Campbell, a woman who was the first person to design a naval vessel (the Oliver Hazard Perry-class frigates using the CAD-CAM system she had debugged. She was officially declared “The Hidden Figure of the Navy” in addition to numerous other awards), and a man who has worked at Kroger for 49 years and is still going!

When I ask a person if I can interview them, they nearly all say something like, “I haven’t done anything special,” or “What’s to tell?” Yet, I have found that all 54 people I’ve written about to date have great stories and lots of interesting things to say. I should interview all of my childhood friends, as we’ve been scattered across the country and see each other rarely. I know it would be interesting to learn how their lives have gone, what they’ve done, what they’ve endured, what they’ve celebrated, what and who they have loved. I’m telling you, everyone is interesting in his or her own way.

One of the worst things about writing the column is that I only have 750 words per month. A couple of times I have done a two-part story which ran over two months, but I

never have enough room to include all the fun stories my interviewees tell me.  Dr. Jerry Ware, Ph.D. and an incredible medical researcher who is increasing our scientific knowledge and who has published more scientific papers than I want to count, told me a great story that had nothing to do with his own story but which came up as we walked from his research lab to his office. To date it’s my favorite story that I didn’t get to tell.

Jerry is an Arkansas native who now does his research and teaches at the University of Arkansas for Medical Sciences, but for a number of years he was a researcher at the fabled Scripps Research Institute in La Jolla, California, “adjacent to the incredible Torrey Pines Golf Course,” added Jerry, an avid golfer.

Sadly, the Birch Aquarium had a problem. Every so often a fish would come up missing

from this tank or that one. “Some of these species were very valuable,” said Jerry, “and the thought was that an employee was stealing an occasional fish and selling it on the black market.” I could just see the consternation with the scientists scratching their heads, tweaking their beards, and possibly going a little nuts trying to figure out what was happening to their lovely fish.

According to Jerry, most aquariums have a big room above the various tanks where the staff works. At Birch the staff room is like standing on an indoor patio with a bunch of small covered pools or tanks.

The fish kept disappearing until the staff finally decided to set up a video camera above the tanks. What the recording revealed was fascinating.

The video showed an octopus leaving its tank by squeezing out from under its cover, making its way over to another tank, opening the lid, entering the tank, having a nice 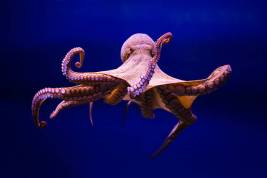 meal on an expensive fish, returning to its own tank before daybreak.

I have loved that octopus ever since hearing the story. I even thought that the adventures of a rogue, aquarium octopus had potential as a children’s story until I remembered Finding Nemo. I decided that devouring exotic fish might be too traumatic for children, so that was that. Sharing the story here will have to suffice. 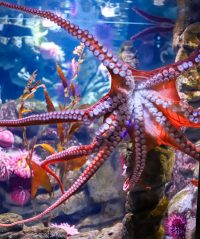 We keep hearing about the search for intelligence in the universe, but it’s obvious there’s a lot of unmeasured and unutilized intelligence in our oceans right here on earth. Research shows the first octopus that we are aware of lived during the Carboniferous Period which started around 296,000,000 years ago. The Field Museum in Chicago has an actual specimen of the oldest octopus we are aware of. Amazingly, octopuses were trolling the oceans 51,000,000 years before the dinosaurs appeared, and the clever octopus survived while the mostly pea-brained dinosaurs went extinct. I have such a new-found respect for these wonderfully bright animals since hearing the story of the rogue octopus which I loved when Jerry told it. I love it still, and I will never eat grilled octopus again!

2 thoughts on “Outsmarting the Smarties”